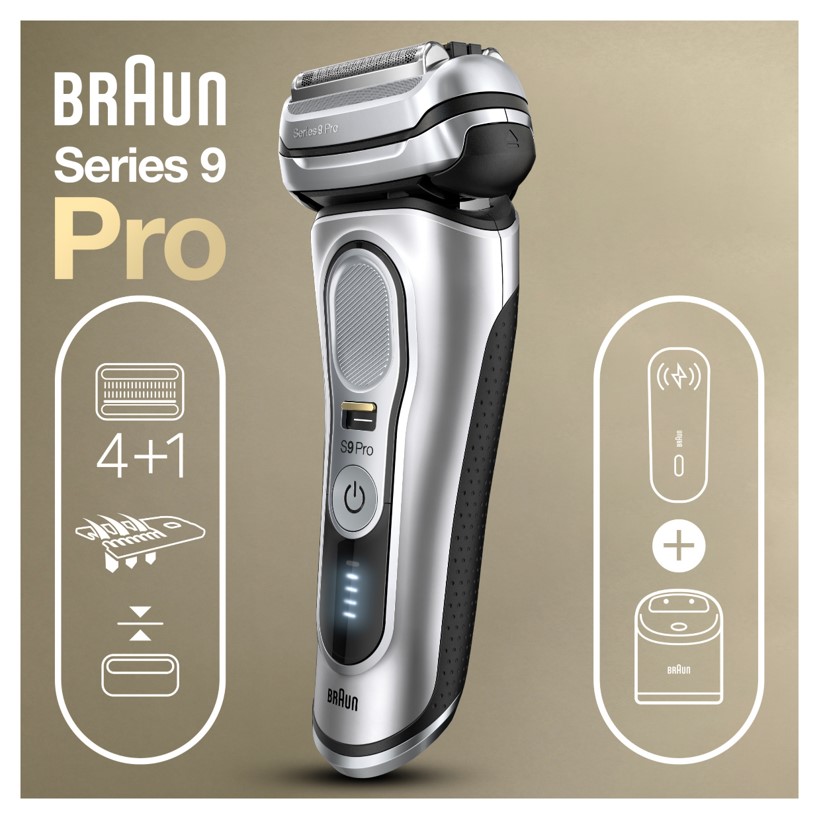 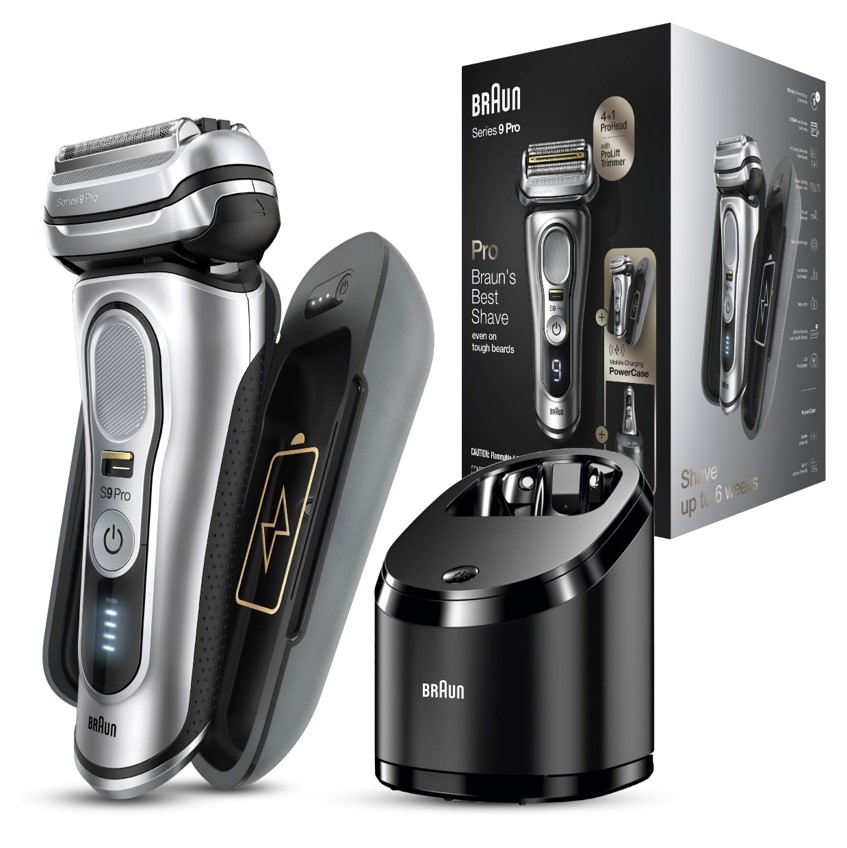 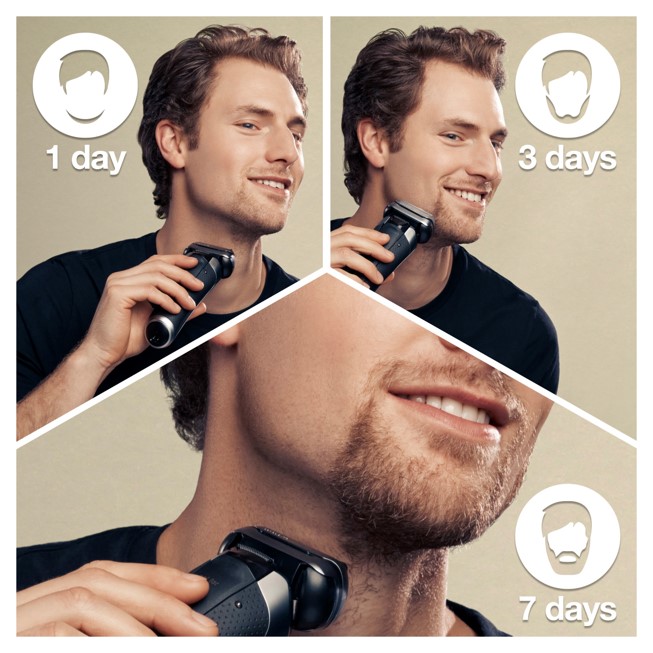 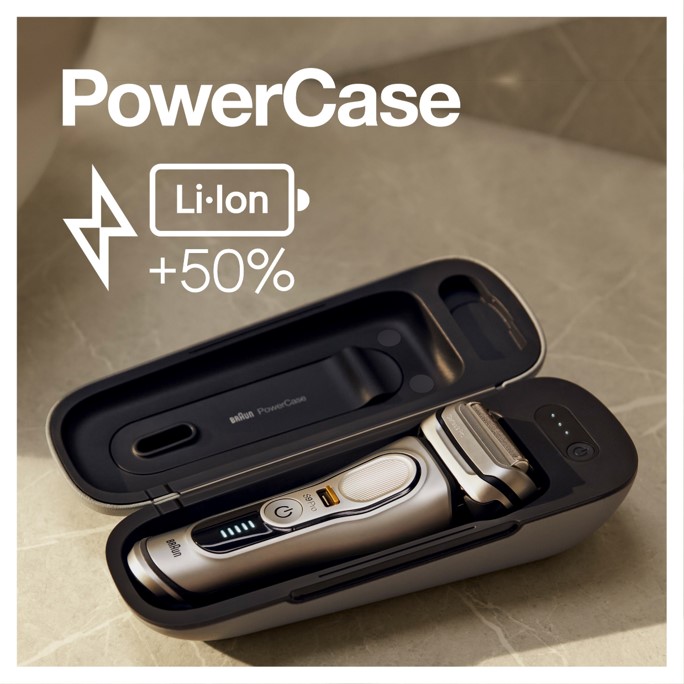 The world's most efficient electric razor*, reinvented to be even better. The new Series 9 Pro is efficient and gentle, no matter if it's a 1, 3, or 7-day beard. Its unique ProLift trimmer lifts and cuts long and flat hair. This electric shaver for men comes with the first-ever PowerCase: a charging shaver case which charges your razor for up to 6 weeks of use. Also comes with a 5-in-1 SmartCare Center that keeps your shaver hygienically clean and performing like new, every day.

Efficient and gentle in every stroke, no matter if it's a 1, 3, or 7-day beard: championing our unique ProLift trimmer, this electric razor for men lifts and cuts tricky hair

More efficient** & gentle: the innovative ProLift trimmer and Braun’s unique Sonic Technology help to shave up to 10% faster**, for a gentle shave.

50% more battery runtime with the world's first PowerCase: charge anytime & anywhere with this portable shaver charging case, its powerful built-in Li-Ion battery charges your shaver for up to 6 weeks of use

Made in Germany & designed to last 7 years: this electric razor is also 100% waterproof and can be used with foam, gel or even under the shower

Efficient and gentle in every stroke, no matter if it's a 1, 3, or 7-day beard: championing our unique ProLift trimmer, this electric razor for men lifts and cuts tricky hair

More efficient** & gentle: the innovative ProLift trimmer and Braun’s unique Sonic Technology help to shave up to 10% faster**, for a gentle shave.

50% more battery runtime with the world's first PowerCase: charge anytime & anywhere with this portable shaver charging case, its powerful built-in Li-Ion battery charges your shaver for up to 6 weeks of use

Made in Germany & designed to last 7 years: this electric razor is also 100% waterproof and can be used with foam, gel or even under the shower

JS_va_jjr2k
Nov 24, 2021
JS_va_jjr2k
I hadn’t used an electric razor in years, but this one is definitely the best. It comes with this charging case, which is so up to date, and also a sanitizing dock for the blade. I would definitely recommend.

ND_fl_k4ssj
Nov 27, 2021
ND_fl_k4ssj
The Braun Series 9 Pro 9477cc Electric Shaver was extremely difficult to use and did not offer specific razor settings to achieve the length and look I was attempting. Very stylish product, but not the most user friendly.

DW_wv_5x79b
Nov 29, 2021
DW_wv_5x79b
Got my braun electric shaver. Started using it and it does a good job but takes many tries to get all the hair on my face. The added clipper is nice to trim up my gotee.

NK_wi_g9485
Nov 30, 2021
NK_wi_g9485
I received a Braun Series 9 Pro 9477cc Electric Shaver as a free sample from PINCHme for my honest review. This was my first foil-type electric razor I have ever used and I am continually impressed on how well it works after 3 weeks of use. It provides a close shave without irritation I often get from the rotary-type shavers I have used in the past. I have very coarse and thick facial hair and this cuts through very well. The product states it will shave through up to 7 days worth of growth, I could see that if you have finer or more sparse hair than I do, but as for my facial hair, I would say anything more than 4 or 5 days should be trimmed with the included trimmer rather that going right after the growth to avoid some uncomfortable pulling. The cleaning station is awesome and works great, no issues there. Manual cleaning is really easy as well, not having to worry about parts flying out while you do it like rotary shavers. The shaver seems well built and sturdy, we will see how it does long term. The charging case is a nice bonus if you need to bring it along for travel (it is a lithium battery so you may need to see if you can bring it with carry-on or not). There are many positives to be had here, I will point out a few negatives I have noticed. One is that you cannot use this while it is on the charger, as it is a safety feature since this can be used in wet applications (in shower or using shaving gel and creams. Really just a minor inconvenience, just need to remember to keep it charged up. The real major issue is the cost (not a real issue for me as I received it as a sample) looking around it typically retails for over $250+ depending on features. It works well and if you need to have a daily or every other day shave this would make sense, but if you only need to do a touch up here and there you would have to weigh if that cost is worth it to you. All said I would say this is a well made shaver that seems to tick all the boxes for me (smooth shave, little to no irritation, easy to maintain and sturdy) so with that I would definitely recommend it.

JF_ms_8972d
Dec 2, 2021
JF_ms_8972d
This is by far the best shaver that I have ever owned, and I have had a lot of shavers. Braun is one of the good names in electric shavers because the quality is high, you definitely get what you pay for. This particular shaver, the series 9 pro 9477cc electric shaver, comes with all the bells and whistles.... And then some! You get a great shave every time. I even use it to shave my head and it does a fantastic job! This shaver comes with a lowercase which is pretty slick, just set it in and close it up. You can see through the window the status of the charge.... And it charges fast! The included smart are center can also charge the shaver and keeps it clean and like brand new. I am extremely happy with it and look forward to years of great shave, front and top! I received this product free from PINCHme in exchange for an honest review.

SD_ny_bpw9m
Dec 2, 2021
SD_ny_bpw9m
This is a very good shaver, I have thick facial hair and stubble and it's not always easy to get a close shave. Now that we're headed back into the office regularly I remembered how much of a pain shaving often is. This has been making it so much easier for me.

TP_ne_87sqr
Dec 2, 2021
TP_ne_87sqr
I received my Series 9 Pro 9477cc electric razor and I absolutely love the close shave. I use it every couple days and I am very impressed by the quality and the price is great. This electric shaver is also 100% waterproof and can be used with foam, gel, or even under the shower. It stays charged for long periods of times, I haven't charged it in 2 weeks. I highly recommend to anyone looking for an affordable, excellent quality razor.

JV_ny_k7q5m
Dec 3, 2021
JV_ny_k7q5m
I just LOVE it! It’s a fantastic razor, leaves a clean shave, very comfortable and transportable. The addition to the charging case is great, so I don’t have to ever worry about running out of battery. The cleaning station makes it a whole new game. But also, after just one shave, it’s easy to clean it with the little brush that is included. Fast, close shave. No pain and no mess.

DN_il_cvwhz
Dec 8, 2021
DN_il_cvwhz
The BRAUN SERIES 9 PRO 9477CC ELECTRIC SHAVER, 4+1 HEAD WITH PROLIFT TRIMMER, POWERCASE, 5-IN-1 SMARTCARE CENTER is the best razor I have ever used. The best shave of my life, easy to use, easy to clean, and works like a charm! You will obsessively love this razor like I do!

AM_ny_4nmfn
Dec 9, 2021
AM_ny_4nmfn
If you are in the market for a new electric razor or trimmer, this is the one! I am very happy I got the opportunity to try this electric shaver for free from PINCHme. It is well worth the investment for a high quality close, smooth, and gentle shave. It also comes with a built-in PowerCase, which is super convenient and the battery life is fantastic. Highly recommend!

JM_ca_fq7jv
Dec 9, 2021
JM_ca_fq7jv
The Braun Series 9 Pro 9477cc Electric Shaver is a solid product. From the design and utility of the shaver it matches form and function effortlessly. I was impressed with how easy it is to charge the shaver as well as the accompanying charging travel case. The shaver does a good job maintaining my non-beard areas and easy as well as practical for a quick touch up. Although the instructions are simplistic I was able to figure things out relatively easy.

MW_nj_k9ds7
Dec 17, 2021
MW_nj_k9ds7
So I received the Braun Series 9 Pro 9477cc electric shaver from PINCHme for free to try. The Braun Series 9 does work great and the battery last a long time. I have found however to does miss a few spots around the sides of my chin/neck and I have to go over them several times. The automatic cleaner that came with it is definitely a life saver though. You just set the Braun Series 9 Pro 9477cc electric razor in its stand and push a button. It will clean the heads with what seems like a rubbing alcohol solution and it will be ready for your next use.

GC_az_hkf5j
Dec 27, 2021
GC_az_hkf5j
I received the BRAUN SERIES 9 PRO 9477CC ELECTRIC SHAVER, 4+1 HEAD WITH PROLIFT TRIMMER, POWERCASE, 5-IN-1 SMARTCARE CENTER for free from PinchMe to test out. I have been extremely impressed with it over the last month. From the portable charging case to the cleaning station, everything about this razor is top of the line. I'm the past I've always preferred rotary razors because they seemed to give a closer shave. I was genuinely surprised by how good of a shave I get with this razor, even if it's been a few days since I shaved. Shaving too soon or to too late usually results in ingrown or pulled hairs but I have yet to experience either when using the Braun. 10/10, world recommend to anyone looking for a great, consistent shave. Thanks PinchMe!

DM_mn_5zwl9
Dec 28, 2021
DM_mn_5zwl9
I have been a Braun shaver user for years and I have tried many different versions, I was so excited to be able to try this newest version of one of my favorite shavers and I was really happy. I would have to say it lived up to all the hype. I got the closest shave I have been able to get outside of the barber shop/salon. My skin did not react at all and was smooth and clean. Every time I wonder how they can top the last but this one does. It is easy to use, so easy to clean and I really like the feature of the stand unit that cleans the heads. Battery lasts a very long time, I have only had to charge it once since the initial charge and I use it at least every other day. Highly recommend!

JS_ny_bzhk7
Jan 5, 2022
JS_ny_bzhk7
I must say, I absolutely love the Braun Series 9 Pro 9477cc Electric Shaver. I'm so grateful I received this from pinchme. I usually let my stubble grow for about a week and then buzz it. I had a quality razor before, but this is beyond compare. My beard hair is a bit scraggly and thick, so cheap razors can't really handle it and pull on the hair, making it uncomfortable and sometimes painful. The charging PowerCase is also awesome! I'll never have to worry about it dying on me. It's a gentle shave, an ergonomic grip, and looks so sleek and modern. This shaver is everything!

JS_tx_fht2d
Jan 15, 2022
JS_tx_fht2d
"Braun Series 9 Pro 9477cc Electric Shaver is the best shave I’ve ever had. I usually break out pretty easily, and have super sensitive skin but I am def enjoying this shave. 10/10 would recommend!